I can’t believe it’s been over two months since my last post. Time really flies when you are… well, NOT having fun. I won’t dwell on it anymore than i already have but i really got the wind knocked out of me right after i was finally able to put The Summer Dancers down on the shelf. I’m slowly recuperating though and what better way to do so than to dive head first into a new impossible project. Those with a really sharp eagle eye, and who are reading this on a regular good old fashioned computer, might notice a new menu or whatever on top.

Crazy rare, expensive and in all likelihood even harder to find than many of the books. We’re talking about those kinds of magazines. This is what i’ve decided to spend my time on from now on, sounds and feels crazy… But that’s also how i felt when i started with the books and that turned out OK in the end so who knows. More than anything i desperately need something to fill this stupid void that i created for myself with, and magazines felt like the natural step. So… game on, bitch!

Even though i’ve spent a little less time than usual on Amazon and ebay i haven’t completely disconnected. I can’t remember the order of things but i have gotten, at least by my standards, quite a bit of stuff. I’ve yet to get my hands on most of it though. But anyways, i’ve gotten one of the newer book cover thingys from the 80’s – Tennessee Williams: Collected Stories. There are a couple of books like this using Warhols portraits of people on the cover and to be honest i haven’t been paying much attention to them until recently. There might one or two or whatever that will prove a little tricky to track down but in general i would say that all of these are a muuuuuuuuch easier catch than the ones from the 50’s and 60’s. Anyways, it got me going again and it’s always nice to tick a box regardless of the effort.

I also took another gamble on a copy of Pistols For Two that popped up on Amazon. I’ve been lucky on more than one occasion in the past and even though i knew that the image shown was a stock image kind of thing the discription at least mentioned “cover” and for less than $10 i had to give it a go. Turns out i wasn’t as lucky this time as the book didn’t come with a dust jacket, can’t win them all and no tears shed over that.

Another thing that got me a little excited a while back was a copy of The Summer Dancers on Amazon that, if memory serves me right, was listed for something like $65. Once again the discription didn’t mention “dust jacket” and as i always do i wasted time asking for images. I never got a reply and later that same day the book was sold. Bit of a bummer but if it did in fact come with the jacket then a big congratulations to whoever snacthed it from me! And while on the topic of this book. It’s funny how something can be totally impossble to find and not show up anywhere for a loooooong period of time than to just all of a sudden be all over the place. Not long after i got my copy another was listed on ebay in what looked to be in great shape, after that i’ve seen yet another on ebay and also one on Amazon. These might be same ones though, but whatever the case it’s funny to see it so easily accessible. They have all been listed for +$400-500 though so maybe “easily accessible” isn’t the correct term.

What else is new… well, i’ve gotten yet another yellow MTV cover. This one is also sealed and was part of a set kind of thing of two MTV records, no idea what the other one is all about but at less than $40 for the pair it was a no brainer. But enough is enough, i don’t want any more of these now. I might actually go ahead and lose my seller virginity and try and unload two of these and get some funds to put in the magazine account. We’ll se what happens… I’ve also added a couple of doubles to my book collection, nothing spectacular but two copies of The Saint in Europe for less than $25 each i still think are two pretty good deals. I can’t say i was looking to upgrade my current copy and this particular book is probably one of the easiest to find but i’m so mentally damaged after this whole thing that i just can’t resist a bargain. 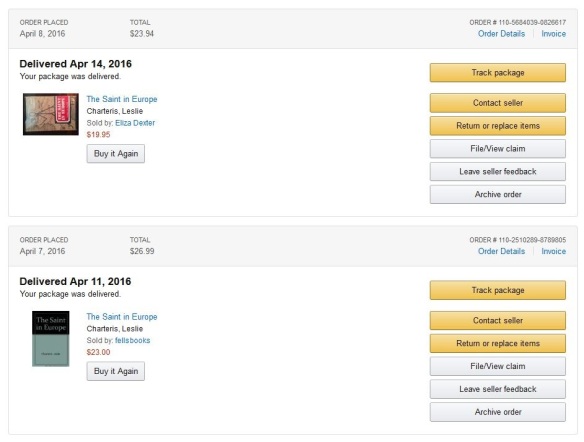 That’s that when it comes to books and record covers. And that leaves us with the magazines. All of a sudden i’m short on time here at work so have to cut to the chase. I got Maréchals book about a month ago and it’s absolutely fantastic, i almost can’t believe it’s by the same Maréchal who did the record covers book. But more on that later, great read, great book and of course a great source of information. I believe most/all of the magazines are in a list i got from Guy Minnebach way back when, but it’s not easy to find images of a lot of the magazines so up until recently i didn’t know what to look for. Now i really need to speed up here… long story short. I’ve embarked on the second trade of my collecting career and parted with one of my spare books and in return i will get two magazines. More on this when i get a hold of the magazines and when i have more time but from my point of view this was a great and very generous trade worked out with Aaron who has the very cool site/shop Projectobject. The same Aaron also tipped me off to another magaine on ebay a while ago, this one is not particularly rare but it was sealed and cheap so… a win/win situation. Thank you! I haven’t worked out a plan or whatever in my head on how i will go about this, but i’m pretty sure i’ll try and focus on the older magazines from the 50’s which would put the total number of magazines i need to find at twelve if i’m not mistaken. I took another baby step on this journey earlier in the week when i had the unexpected fortune of winning this auction. I realize it’s not in the best condition but still, about a year ago this magazine sold for $420, granted that one looks to be in much better shape, but still… i was very surprised! Good times all around. And i guess that leaves me at 3/12 of the way there…

Time’s up. Sorry for any spelling mistakes but i don’t have time to read it all through. Anyways… perhaps it’s stupid to start yet another collection that will most likely never be complete but i’m really, REALLY looking forward to trying and find out how far i can take it.